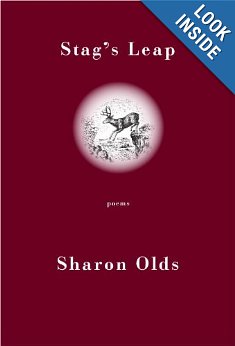 In Stag’s Leap, Sharon Olds discusses divorce and the torrent of emotions that accompany it. She brings us hope, because despite the divorce and the pain that accompanies it, she finds emotional acceptance, if not complete recovery. The collection reads as if Olds is looking through an old photo album and is telling us about the naivety of her youth. She captures the “good” moments with a critical eye, and disparages the bad. But when she has shown us the last picture, she is able to put the album away and move on. Like all of us, she reaches for it from time to time, but is aware that the pictures will never come to life and carry her back to the beginning of her marriage.

Emotion carries this collection, but its structure makes it immediate and real. We feel the husband’s absence in the empty spaces, and we can hear the speaker’s sobs in “The Worst Thing” through the dashes: “a god—of love—and I’d given—I had meant/ to give—my life—to it—and I/ had failed.” Olds depicts her husband as a fleeting mythological character: his figure is a leaping stag, a Ken doll and a Chagall bridegroom. We rarely hear his voice directly.

The reader experiences the anger of the divorce, the betrayal, the longing to be reunited and finally the acceptance of the inherent problems in the relationship. She was not “the one he wanted to rise from/ or return to” and he was never “happy when words/ were called for, and [she] stood.” Olds shows us her relationship without hesitating to speak directly about emotion and intimacy. We see their marriage from beginning to end, which is painted as a “comedy of ideal and error” on every page, with Olds communicating its textures so clearly we can feel it. We feel the “cindery lichen/ skin between the male breasts,” and feel her “holding his heart in place from the back/ and smoothing it from the front.” Olds contrasts the roughness of divorce with the smoothness of warm memories.

The strength of the poetry seems to come directly from the strength of Olds’ recovery from divorce. As time progresses in the collection, structure grows stronger, connections go deeper, and experiments begin. Olds’ dry but gifted humor brings light to a heavy subject, and staves off melodrama. She captures loss and the absence of love, which is “like a songbird’s rib cage picked clean.” She brings self-criticism and a humble self-deprecating humor to her poetry in pieces like “Left Wife Goose,” which plays with the “old maid” character in nursery rhymes.

Old’s poetry illustrates the cyclical nature of love and loss. Seasons pass, blend together and become “Years Later” within the structure of the collection. Above all, Old’s collection emphasizes hope. Though the ribcage of the songbird is picked clean, Olds adds that rebirth arises from loss. In the final poem, she watches the smoke leave behind the ashes of her father’s body, and the ashes of her mother leave her hand. These physical changes mirror the change Olds experienced after her divorce and the loss of her husband. But the end of the marriage now represents the promise of new life. She will not see her husband again: “no, he does not/ want to meet again, in a year” But his permanent absence is no longer a hole in the speaker’s life; it has become a characteristic of her living.

Megan Mericle is a senior at Western Carolina University. She is double majoring in English: Professional Writing and Psychology. She recently returned from a semester abroad at Leiden University in the Netherlands.  Her work has appeared in the student literary journal Nomad and the 2012 NCUR Proceedings.

See all items about Megan Mericle

A Journal of Contemporary Poetry